From Philosophy to Alkyds: The Stunning Work of George Bowles

George Bowles is known for his highly realistic and meticulously detailed portraits, landscapes and still lifes, in alkyd. His work has a museum quality to it, bringing to mind the classical art of the 18th century. Viewers are frequently stunned at the photorealistic quality of the work, which is painstakingly done over time.

First of all, what is alkyd?

According to Bowles, who swears by this medium, alkyd resins are composed of complex fatty acids and alcohols which are derived from natural plant origins. These ingredients are heated and combined with oils that are resistant to yellowing to form an extremely stable synthetic material referred to as an oil-modified alkyd resin. Once the oil is combined, it is no longer a free oil, but a completely bonded oil which will not separate from the resin. An alkyd resin is highly adhesive; pale and transparent; soluble, when wet in turpentine or mineral spirits; tough, flexible, and resistant to solvents when dry. Additionally, alkyd resin dries more rapidly than the linseed oil that is used as a binder for most oil colours, but more slowly than the plastic resin that is used as a binder in acrylic colours. Alkyd colours are less prone to darkening, embrittlement, and cracking with age than traditional oil colours. Given the timeless quality of Bowles's work, it is easy to understand his desire to use a medium that does not yellow, or otherwise disintegrate over time.

An Iowa native, Bowles trained first as a philosopher, receiving a BA from the University of Denver in 1966, and a PhD from Stanford in 1970; he taught philosophy for over twenty years, publishing several articles on logic.  Having drawn and painted from childhood, and having done several commissioned portraits, animal paintings and landscapes, he has been painting at least since 1958.  After his academic career, he went in 1996 to the Bougie Studio in Minneapolis to get a rigorous four-year art education modeled on the French ateliers of the 19th century.

In a typical understatement, Bowles says of his work: “I aspire to create well-composed and, when possible, beautiful paintings." Most would agree, mission accomplished!

GalleryUndergroundBlogger
Arlington, Virginia, United States
Let's explore together behind the scenes of our thriving Arlington Artists Alliance art gallery and studios, and talk about our artists, their work, our events and other cool, creative, art-related stuff! Are you an artist? Awesome, we have blog posts just for artists! Questions or suggestions? Contact us at art@galleryunderground.org.

If you are an artist living or working in Arlington, VA or have a studio or have work in a gallery in Arlington, we welcome you to join the Arlington Artists Alliance.
To join: https://arlingtonartistsalliance.org/get-involved/

Studios Underground are located in the Crystal City Shops adjacent to Gallery Underground. The Red Studios holds 13 working artists, the Blue Studios houses 7 artists, and the Cyan Studios houses 7 artists. Stop in, check out the art or purchase a piece so new it hasn’t seen the world outside the studios! For more information or to arrange an appointment with a particular artist, please email Gallery Underground Studio Manager Johnny Dukovich at greenmoonart@gmail.com. Send mail

By Sandi Parker Many of us have done it, most of us have considered it, some of us have just dreamt about it: mounting a solo show. Thi... 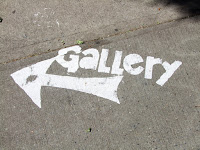